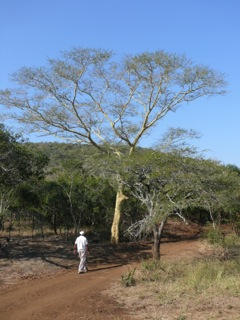 The fever tree is an attractive, semi-deciduous to deciduous tree approximately 15 to 25 meters tall and has an open, rounded to spreading or flattish crown which is sparsely foliated. The characteristic, almost luminous, lime green to greenish-yellow bark is smooth, slightly flaking, and coated in a yellow powdery substance described by some as sulphurous. If the powdery surface is rubbed away with the finger it will reveal a green bark beneath. Young twigs have a red-brown bark which peels off leaving the twigs sulphur yellow. The long straight white thorns are arranged in pairs and although they are very significant on young trees they often become barely noticeable on mature specimens. Bright yellow, golden, ball-like flowers which are sweetly scented are borne in clusters on shortened side shoots at the nodes and towards the ends of branches. Flowering occurs from August or September to November. Flowers are followed by the production of yellowish- brown to brown pods which split open to reveal the small hard brown seeds, which may be harvested from January to April. The genus name Acacia is derived from the greek word acantha meaning spine, thorn or prickle and the species name xanthophloea is derived from the greek words xanthos meaning yellow and phloios meaning bark. The fever tree occurs mainly in depressions and shallow pans where underground water is present or surface water collects after summer rains. It is also found in low-lying swampy areas, along the margins of lakes and on river banks. It often forms pure, dense stands of closed woodland in seasonally flooded areas on alluvial soils. This tree can be found from Kenya in the north to KwaZulu Natal in the south. It is a prominent feature in the lowveld region of South Africa. This tree is popular amongst birds for nest building as the thorns add extra protection against predators such as snakes. Young branches and leaves are eaten by elephant and the leaves and pods are eaten by giraffe and vervet monkeys. Monkeys and grey louries also eat the flowers. The gum and green seeds are eaten by baboons. Insects such as bees are attracted by the yellow colour and sweet scent of the flowers and perform a pollination role. The wood is hard, heavy and a suitable general purpose timber but it should be seasoned before use otherwise it is likely to crack. The main stems and larger branches are used to fence out hippo from fields on the Pongola floodplain and the timber is reputed to be used for boxwood. Medicinally the bark is used for treating fevers and eye complaints. Early pioneers thought that this tree caused a fever since people travelling or living in the areas where it grew contracted a bad fever. They therefore associated the fever with the tree. This however was erroneous as the swampy places where fever trees grow are also ideal breeding grounds for mosquitoes, which carry malaria. Thus through these early settlers the myth was born and the plant acquired its name as the fever tree.