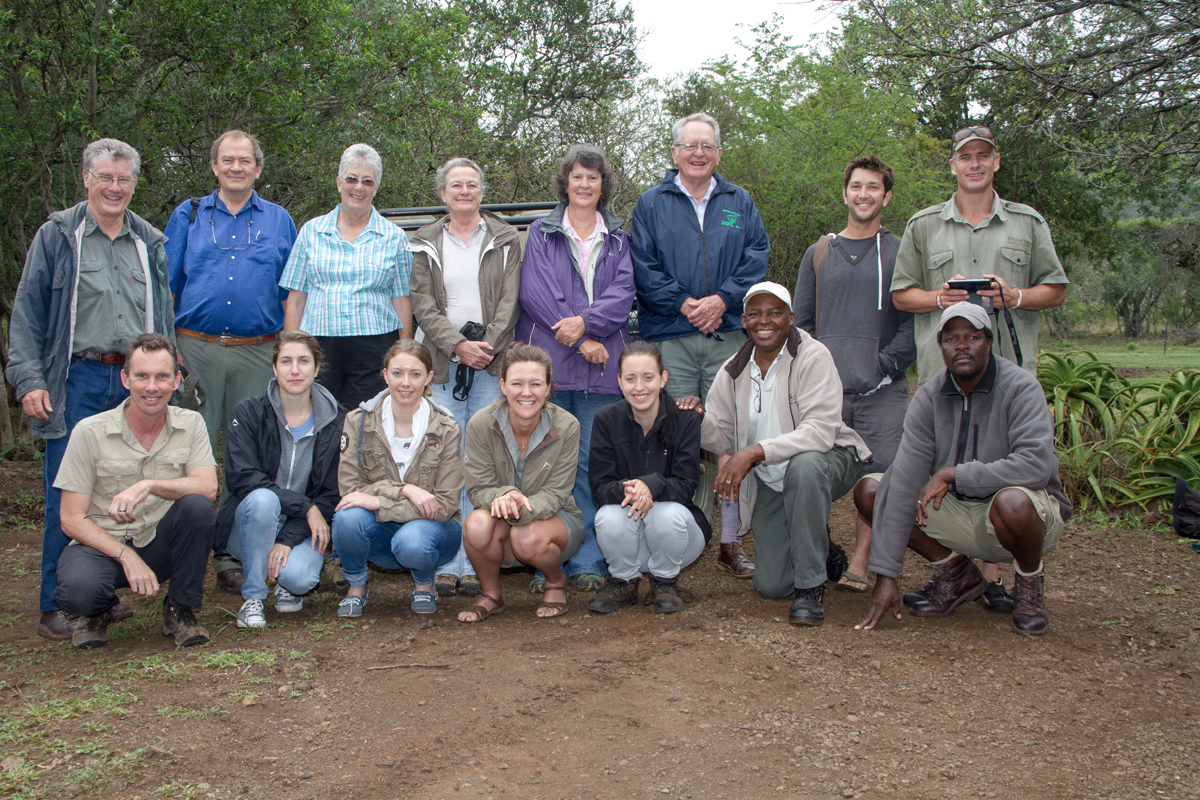 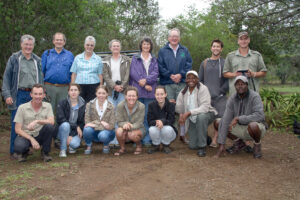 Ross Goode  was busy completing a National Diploma in Nature Conservation when he started guiding at Vlei Lodge pn Phinda in 1999.  As part of the practical component of the diploma it was required to do grass surveys or Veld Condition Assessments in order to calculate the carrying capacity of the reserve, as well as to identify areas that qualify for burning, as a means of rotational grazing by providing protein rich grazing that appears after a burn.  Phinda Private Game Reserve already had a monitoring program in place, therefore he adopted the monitoring technique recommended to Phinda by Prof Winston Trollope so he could complete the practical component of his National Diploma Nature Conservation.

Ross initiated this visit of experts in their field to say thanks for their hard work and passion that gave him the means to identify the plants and classify the vegetation types. He  showed the participants what methods of management are currently being used and wanted their expertise if  they agreed on it.

expert to assist him in identification of many plants that are not in the books thus not named yet. Ross’s intention is to update the reserves species list however needs the assistance of these experts to do so. Further he wanted them to take a look at the possible evidence of the origins and regeneration of the Sand Forest that exists on the reserve that have not yet been
described or discovered, where possible with methods of assessment and means of measurement of the diversity on the reserve.Ross showed the participants different  sites to demonstrate the effective use of fire as a management tool in controlling alien invasive and indigenous encroaching bush species.  A demonstration of the vegetation monitoring techniques used to assess the condition of the vegetation that form part of the reserves vegetation monitoring program.

The following books or papers have been published and some background of what each participant is specialzed in :

Isabel Johnson:  Biodiversity Stewardship Implementer Botanical Society of South Africa.  Isabel was one of the members that conducted the biodiversity assessment on the reserve.

·       Processes most strongly influencing vegetation change in the past and present, including fire, vertebrate herbivory, climate extremes, atmospheric [CO2] and habitat fragmentation.
·       Plant-animal interactions
·       Plant form and function.
·       Systems studied include sub-tropical grasslands, savannas and winter rainfall shrublands.
·       A major research project (funded by the Mellon Foundation and the NRF) on biomes and their boundaries started in 2010.
Professor Winston Trollope: Head of Research & Development Division Working on Fire International.

The 15 000 hectare Phinda Private Game Reserve was established in 1990 and created out of a string of bankrupt and derelict pineapple, sisal, wild cotton and mixed cattle and game farms. Ideally situated between two greater conservation areas, Mkuze Game Reserve forming the western boundary and the Greater St Lucia Wetland Park the northern and eastern boundary, the chosen site for the reserve fulfilled the objectives of the management company CCAfrica; To acquire bankrupt and derelict farmland next to greater conservation areas in an effort to unify fragmented ecological habitats, re-establishing the migratory routes of game animals thereby resulting in self-regulating ecological units that would require little ecological management.

For over 100 years a wide range of farming practices took place on the properties that make up the Reserve. These farming practices resulted in most of the reserve comprising over grazed and bush encroached areas that were in desperate need of rehabilitation, to their former natural productive states, in order to sustain the myriad of formerly naturally occurring game species that had been reintroduced on the reserve. Not only was the land severely over grazed and bush encroached, an even greater ecological challenge threatening the success of the reserve was the severe infestations of the alien invasive Chromolaena odorata. The reserve was said to be an ecological disaster by being the worst infested property in the whole of Zululand and would therefore never succeed. The inherent challenges resulted in much time and money being spent to combat both the alien plant and indigenous encroaching species. To top all these inherent challenges off, the Department of Environment Affairs threatened to close the reserve down if certain environmental issues such as accelerated soil erosion taking place on the reserve were not seen to and relevant management actions put in place to curb the erosion problem. Andrew Lewis, reserve manager at the time, attended a Wildlife Management Course at the Wildlife College near Orpen in the Kruger National Park, where he met one of the guests speakers, Winston Trollope and requested Winston please visit Phinda and advise on a suitable monitoring program for the reserve.

In 1998 Winston and Lynne, visited Phinda to provide recommendations and assist in the implementation of a monitoring program for the reserve. Representative sites were placed in each of the Homogenous Vegetation Units on the reserve in the form of permanent sites, where fixed point photographs are taken annually in order to monitor any changes in woody vegetation over time and from where the annual Veld Condition Assessments take place. The data collected has been used as a decision support base from where management decisions with regards to the prescribed burning program are derived, based on the ecological status of the veld. Since the implementation of the monitoring program and through continuous monitoring and application of management recommendations based on the ecological status of the veld, the monitoring program has been an essential management tool that has provided a successful solution for each of the inherent ecological dilemmas that threatened the reserves success. It has been responsible for the successful rehabilitation of the over grazed rangelands to healthy productive rangelands, controlling and in some cases eradicating invasive alien and indigenous encroaching vegetation. Finally the monitoring program provided sufficient evidence in the form of quantitative data to close the case with the DEA regarding the soil erosion problem on the reserve. 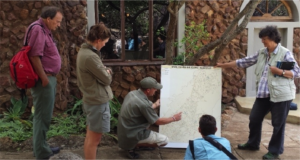 Phinda has since been joined by neighbouring farms, namely Zuka, Bumbeni and Nkonka to form the Mun-ya-wana Conservancy which covers an area of over 24 000 hectares in extent. The southern portion of the Reserve begins in the KwaZulu Natal Lowveld and extends in a north-easterly direction over the southernmost extremity of the Ubombo Mountain Range and onto Maputaland’s gently undulating Coastal Plain. The geology of the reserve is therefore extremely diverse with a geological history that began over 200 million years ago and ended with the last geological event taking place as recently as 10 000 years ago. The vegetation of the reserve is closely associated with and directly related to the diverse underlying geology and soils. The south-western portion of the reserve occurs on lithic and melanic clay-rich soils derived from basic basalt of the Letaba Formation, Karoo Sequence (200+ m.y.a) where the vegetation comprises Mixed Zululand Lowveld Savanna and Seasonal Stream vegetation. East of the basalts are the Ubombo Mountains which are made up of resistant rhyolitic rocks and well drained sandy lithic soils of the Jozini Formation, Karoo Sequence (140 m.y.a) and comprise Mixed Lebombo Woodlands, Rocky Outcrops, Forested gorges and Grassland vegetation. Between the Ubombo Mountains and the Quaternary marine deposits of the Muzi Formation is an area of Cretaceous sediments consisting mainly of conglomerate sandstone and siltstone of the Makatini, Mzinene and St Lucia Formations, Zululand Group (140-65 m.y.a). A diverse range of dark and red clay soils, as well as duplex soils host a Mixed Acacia Bushveld vegetation type with Alluvial zone vegetation comprising Riverine Forest and Woodlands as well as Floodplain Grasslands in between. The Seasonal Streams of the Cretaceous sediments consist of sandy clay lithic as well as sandy loam cumulic soils that host a narrow, continuous, closed canopy forest along the lengths of each meandering system. These forests are exceptionally species rich in comparison to the Seasonal Streams of the Mixed Zululand Lowveld Vegetation and adjacent, surrounding vegetation units. Further north and east the sedimentary deposits of the Zululand Group were overlain by marine deposits of the Muzi Formation, related to the marine transgression and regression resulting in the most conspicuous topographic feature of the Maputaland Coastal Plain, the linear north–south trending dune ridges parallel to the present day coastline. The landforms of the Muzi Formation are extensively covered in aelion blown sands derived from the Berea and Bluff Formations (5 m.y.a to 10 000 y.a).  This Coastal Plain Zone is characterised by its complex mosaic of vegetation types; Palmveld, Hygrophilous and Woody Grassland, Sandveld Woodland Communities, Sand Thicket on termataria, and Sand Forest, each possessing high levels of species richness. Sand Forest is endemic to this tropical and subtropical coastal belt of southern Mozambique and north-eastern KwaZulu Natal known as Maputaland and is therefore the most unique plant community of the Maputaland Centre.

The topography and geology are undoubtedly the two most noteworthy features responsible for contributing to the uniqueness of the area, specifically with regards to the species rich fauna and flora that is to be found there. Maputaland contains such remarkable biodiversity and high levels of plant endemism, that it has been recognised as an IUCN Centre of Plant Endemism. Not only are the numbers of endemics high, but they virtually spread across an entire taxonomic system.