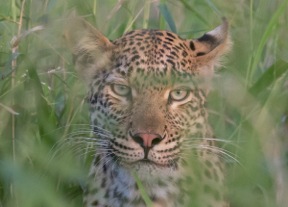 Nkonka purchased 6 more cameras from Wildlife ACT, with a total of 8 we have 4 different camera traps as they need to be placed as pairs opposite each other.

The Panthera Leopard project was successfully finished last year on Munyawana Game Reserve, where camera trap surveys give detailed information on the leopard population. A report accumulated all conservation measures and what’s happening with leopard Conservation in KZN.

As Nkonka/Sutton was not part of this project we have decided in agreement with Phinda to establish our own research on leopards with the assistance of our Habitat Manager Carl Walker, who has got many years of experience to habituated leopards. Since dropping fences with Zuka and Sutton in 2011, we have had a lot of evidence of leopards on our part of the reserve. Sightings have been very rare as the leopards have been hunted in the past and there are still neighbouring reserves that continue to bait and shoot leopard which has very negative impact on the leopard population. 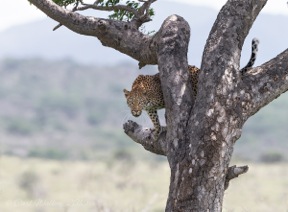 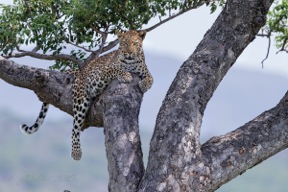 Lately we have been monitoring leopards in our part of the reserve and familiarising them with vehicles and humans, fortunately our current efforts have been successful.

with assistance of tracker Alson, Carl has had four successful days in a row working this female as she killed a male impala close to Hippo dam in Sutton. We all know leopards love trees but we also know that predator pressure here on leopard (hyeana, lion etc) has no bearing yet on these animals so they can afford to leave their kills cached away in a bush. This beauty though loves lying in trees. So Carl has aptly named her Inkweli (one who climbs ).

It makes a considerable difference being able to see the Leopard you are trying to habituate as she often lazes in the the trees.  Last Sunday she decided to wander away from her kill to climb a tall Marula tree thus enabling her to keep a close eye on her kill. Earlier in the morning she slipped away and disappeared into the long grass. An hour later she was found up the big Marula tree again in the open areas of Sutton close to Nkonka corner. 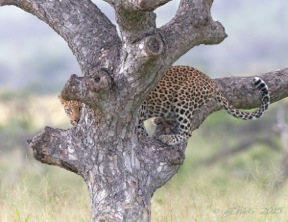 In the few hours of watching her she climbed about 5 different Marula’s.