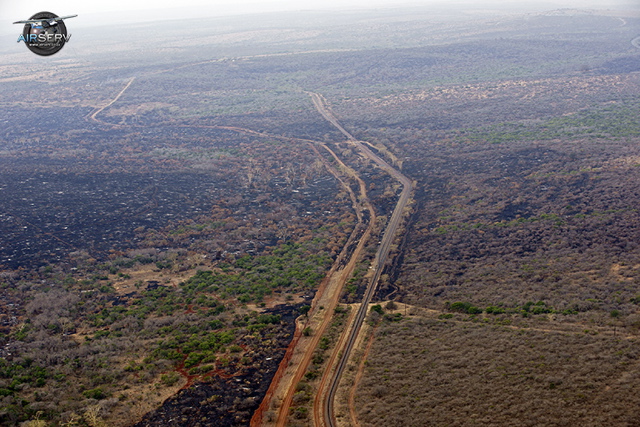 With the help of strong winds and a dry season, a devastating fire raged across the borders from our neighboring farm, Sutton into Nkonka, killing one white rhino calf and one black rhino. There is speculation that the fire started along the railway line as can be seen in the photographs taken with the Bateleurs last week. There was another fire from the N2 but this was a few weeks ago and did not link up with this fire. Close inspection from the air and ground It is believed that the fire started just south of the Mhlosinga road crossing – approx 250 m. Tony Roberts from the ZFPA says that this is a common occurrence especially with diesel trains that have heavy loads. The wheels spin when trains pull off creating lots of sparks. Too prove negligence is going to be very difficult. Luke and other ranges managed to have a look at the remaining black rhino bull on Friday. What appeared to be peeling and pink skin on his chest and back legs were in fact a heavy tick load and normal pink skin. Dave Cooper was very happy with his condition. The bull and cow and calf are all in good condition. Adult white rhino 71 who was treated the following day for burns has been seen on a number of occasions drinking and eating lucerne close to Sutton Dam and appears to be doing well. She appears to be growing new skin over the burnt skin that we peeled and treated for infection. The rhino monitors are now focused on white rhino cow and calf 90 and 91 who were also treated for burns on the following Saturday. We are sitting with a tally of about 100 antelope and are awaiting the final list with photographs and GPS co-ords. Post burn monitoring of veld – Philip has been asked to investigate options of monitoring the vegetation pre and post this burn. There are very few examples of fire storms and there effects on vegetation. We would like to do a detailed study on this fire.